How did I, a lowly entry-level Learning Assistant, manage to get myself a free ticket to the Museum Association Conference in Glasgow? Answer: A lot of grovelling and a bloody good short essay on why I should be chosen to represent the museum I work for.

On the flight to Glasgow I was giddy with excitement, or maybe it was just the fact that I was 40,000 feet in the air in a small bus with wings. I had never been to a conference before, but I did have to speak at a mock conference as part of a postgraduate museum studies course. But that in no way prepared me for this conference.

While I was there to represent the museum I work for, I had a hidden agenda. I was really there to represent the West Midlands Emerging Museum Professionals network (WMEMP). In preparation I had made business cards and stickers. In the event that should anyone from the network be there, they would stick a sticker on their delegate badge in order to represent the group. I initially had doubts about this marketing ploy. Firstly, the likelihood of any emerging museum professionals being able to afford to go to the conference was very slim. And, of the Emerging Museum Professionals (EMPs) who did somehow manage to secure a ticket, it would be unlikely that any of them would be from the West Midlands.

It took the length of the first keynote speech to realise that I was foolish to think this. Upon leaving the main hall with my WMEMP sticker firmly stuck to both my chest and my badge, the sticker and I were instantly recognised. This kept happening, and members were more than happy to brandish the WMEMP logo on their badges. I had no Idea how much of an impact the group had already made. This only perpetuated my excitement throughout the duration of the conference. 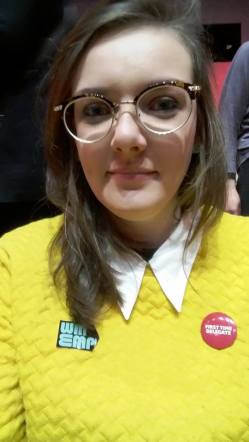 Before boarding the plane I was nervous as I didn’t think emerging museum professionals had a place at the conference. My mind was clouded by worrying thoughts. We can’t afford it. The conference is designed for managers and executives to escape the naïve views of those below them in the museum sector.

I now realised that EMPs do have a place at the conference. It was endearing to know that people were supporting the WMEMP network and that in some way we had made our mark on the museum sector.

Now that I was instantly assured that I had a right to be at this conference, it gave me the confidence to let my voice be heard. I was here to represent EMPs, and represent them I will. With this in mind I bounded towards the first talk of the day with a confident thirst for knowledge. 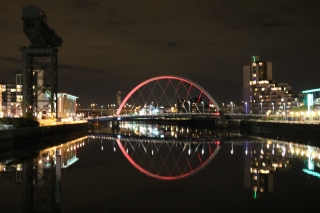 View of the conference from my hotel window

Through attending many of the sessions that the conference had to offer I was struck by a sense of pride in the efforts museums were making to connect with their local communities. I attended many talks over the duration of the conference which mainly used case studies that fit into the three central themes: Being Brave. Health and Wellbeing. People and Places. Each session demonstrated how museums were making an impact in their local communities. Museums were connecting with refugees, ethnic minorities, the LGBTQ+ community and people with serious mental health disorders. And, the ‘Lets Keep The Band Together’ session examined how Glasgow Museums were establishing long standing relationships with Scottish showpeople.

This was enlightening, I wanted to be involved in these projects. It was fulfilling to see that museums can make a real impact on people’s lives. I was reminded that this was why I wanted to work in the museum sector in the first place. But, as an emerging museum professional it seems to me like projects such as these are to be a part of my very distant, more successful, future. If I survive that long in this impenetrable sector.

Whilst studying for a Masters in Museum and Heritage Management I was an integral building block in the structure of projects such as the ones introduced to me at the conference. At one point in my life I was documenting the lives of the people in ex-mining communities and saving historic monuments from being destroyed as well as producing exhibitions as part of a museums redevelopment plan. I was making real strides in my career. And it was these projects that encouraged me to want to do more.

Yet, there I sat, a lowly post-graduate EMP struggling to emerge from my cocoon. Ready to spread my wings and take on the task of building bridges in communities through the connecting power of a museum. The conference was lighting a fire in me again. The fire that had been extinguished by set-back after set-back upon graduating.

However, I was also a little disheartened by some of the rational behind these enlightening projects. The elephant in the room was that these projects were designed to get non-museum goers through the front door. Museums are making a real effort to erase the stigma that they are elitist, alienating institutions. In reality the conference had taught me that museums were far from alienating. To their local communities that is. But, I was still not hearing from the many emerging museum professionals who had the same passion and drive as I did.

Jessica and I getting pissed in front of some pistons 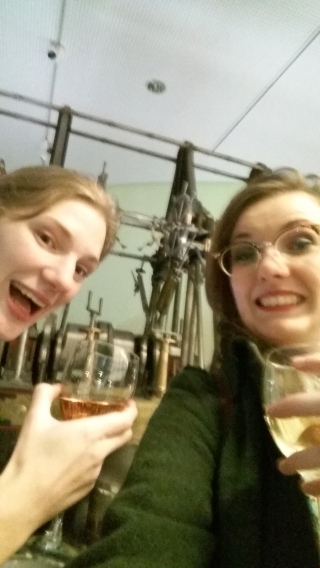 A session entitled ‘Gallery Assistants On The Front Line’ was to be my beacon of hope. Excellent! I thought, finally a talk about me and the majority of the emerging museum professionals that I knew.

Within moments an uncontrollable rage bubbled up from within. At first the monster that emerged from within my soul represented jealousy. As I heard from a gallery assistant at the Victoria & Albert Museum in London, how supportive management were and how they were making real efforts to make sure that she was fully trained and felt comfortable in her role. Her managers understood how tough it was to be an enthusiastic emerging museum professional in a difficult sector.

Initially I was thrilled to know that people did understand the difficulties that came with working in a front of house role (FOH) and that this museum was making an effort to make it easier for EMPs to succeed. But, I was then forced to consider if my employers were making the same efforts to make me feel valued and to help me finally ’emerge’. In a way, just having a role in a museum that required some, if only minor, use of my degree was value enough. But, I hardly ever see my managers. I struggled to think whether they even knew I existed, let alone what I had been doing to get this far in the sector. Yes, they had given me the invaluable opportunity to attend the MA Conference. So, why was I still thinking this?

The discussion that followed this session clarified exactly why? The elephant in the room now had a voice. It voiced the same thoughts of the non-museum goers before museums came up with innovative ways to get them into their institutions.

Museums are elitist and backwards thinking.

And there is certainly a clear divide between front of house staff / emerging museum professionals and most ‘established’ museum professionals. After hearing an enlightening talk about how we can make our FOH staff feel appreciated and get the most out of them it was clear that the managers in the room had not got the message. Now I was hearing managers share stories of how they were unsatisfied with the progression of their staff as well as hearing their best efforts to create alienating roles that would force the unproductive staff out in order to make way for better, incorruptible robotic stand-ins. They clearly did not understand how much effort it takes to stay motivated in a sector that is hell-bent on knocking us back at every turn.

My rage was overwhelming. I had never been so angry. It was like these museum professionals were stealing a part of my soul with each foul word said about FOH staff. It was me and my fellow EMPs who they were slandering.

I was now realising why emerging museum professionals were being priced out of the MA Conference. Museum professionals have no clue what struggles EMPs are facing in the sector. After the second keynote speech on volunteering I was overjoyed to discover that EMPs voices were getting through. A lecturer at West-Minster University explained that his students were volunteering themselves out of the sector as they needed part-time jobs to sustain their efforts to gain more experience. For free. Over time his students were finding their paid employment more profitable as their passion for museums dwindled. Thus, their museum career came to a bitter end. Most EMPs can relate to this story. However, this was clearly news to the people giving the speeches on the stage as they looked nonplus and quickly changed the subject. Hence, my uncontrollable rage in the session on gallery assistants when I heard how museum professionals were favouring volunteers over paid staff.

My rage settled as the voice of reason unexpectedly came billowing out from the centre of the room as Tamsin Russell, my hero, took the mic. She put these elitist professionals in their place by declaring that this ‘backwards’ thinking was no longer welcome. “This is the 21st Century!” She declared. And with that my anger was replaced with hope. Pandora’s Box was closed. What was done was done, but hope still remained.

I am now hopeful in the knowledge that a new generation of emerging museum professionals will change this elitist attitude that is stunting progression in the museum sector. EMPs will make museums more accessible and sustainable. Pam Warhurst, on the panel of The ‘Radical Change Makers’ session gave some interesting advice on how we can bring about this change. For Warhurst, the way to become a ‘radical change maker’ is to take little steps and meet people along the way who will eventually start to ask how they can help.

“You don’t need a strategy, just tell a story of how people are making things happen […] Demonstrate change in a special way. Join up the dots and become the magnet. Create partnerships. Be brave enough without knowing where [you] are going. It’s all about experiences and stories.”

She inspirationally declared to the room.

It’s about time that this sector started to think a little differently. I believe that today’s emerging museum professionals are the way forward. Slowly EMPs are joining the dots and networks such as WMEMP will be the magnet. The many EMPs that approached me at the conference clarified that this is possible. And, even if it is only a handful, museum professionals are hearing our stories and they are willing to help. It’s about time that we showed this sector that we are present and that we do have a voice.